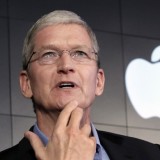 The Apple-FBI dustup has struck a nerve with many people because it represents an unusual blend of a popular consumer brand, privacy and terrorism. Apple CEO Tim Cook rejected a court order to disable the iPhone’s auto-erase function, which removes all data from the device after 10 failed attempts to break into it. The feds’ demand was related to a phone belonging to Syed Rizwan Farook, the San Bernardino, Calif., shooter who gunned down 14 people on Dec. 2.

Apple’s refusal to unlock the phone has sparked a fierce debate over what should take priority – national security needs or the right to privacy. Just half of Americans believe that Apple should be required to unlock the phone, according to the Vrge Analytics survey of 600 Americans conducted February 18-19, 2016.

But that support dips to under half (46 percent) when asked the hypothetical question whether Apple should unlock their own smart phones at the FBI request. And Americans are clearly uneasy over whether the FBI can be trusted with the personal information they found.

Trust, or distrust, clearly drives American’s views. Among those who said they don’t trust the FBI to handle their personal information responsibly, 65 percent don’t believe that Apple should be forced to unlock the shooter’s iPhone and 76 percent would want Apple to refuse to open up their own device if asked by the FBI.

In an email to staff, the company’s CEO, Tim Cook said that the issue isn’t about unlocking one particular iPhone:

This case is about much more than a single phone or a single investigation, so when we received the government’s order we knew we had to speak out. At stake is the data security of hundreds of millions of law-abiding people, and setting a dangerous precedent that threatens everyone’s civil liberties.

In notes about the case on its site, Apple pointed out that in the online world, once a security workaround has been created, the genie can’t be put back in the bottle:

Other tech company execs are in agreement with Cook’s opinion:

Google Chief Executive Sundar Pichai defended Apple on Twitter, saying that “forcing companies to enable hacking could compromise users’ privacy” and that making companies hack their own customers’ devices “could be a troubling precedent.”

What’sApp chief executive Jan Koum said in a Facebook post that he “couldn’t agree more” with Cook and his letter. “We must not allow this dangerous precedent to be set,” he wrote.

Yahoo’s chief information security officer Bob Lord tweeted that “Ordering a company to hack one targeted system is clearly the first step to ordering them to backdoor them all.”

So, in today’s digital age, who do you trust with your valuable data? I guess we’ll find out soon how much our opinions and ultimately our trust is worth.